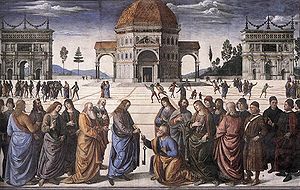 I’ve been spending a fair amount of time, recently, considering the concept of perspective*. As an arts geek (spending time both studying and “making”) perspective, in and of itself, is an intriguing topic. The impact that it had on modern arts cannot be understated. The concept is additionally intriguing as the practical implementation has clear visual impact while maintaining an extensive mathematic background. Unfortunately, or perhaps fortunately, that falls outside the scope of this brief missive.

In a post entitled The Battle of the (Social) Networks Karen Webster of Market Platform Dynamics enumerates conversations she has had regarding Social Networks over the past few weeks. One bit, that was particularly intriguing, discusses which of the social networks will succeed in surviving as one of the “Big Two.” The quote below** is a snippet of that discussion

Those in favor of LinkedIn say that most people divide their lives in two parts – the social and the professional – and that LinkedIn provides that professional outlet for all of those Facebookers who don’t want their job searching to be all that transparent to their network (‘cuz we all know that the beauty of LinkedIn is that you get to job hunt and “network” passively just by being there.) Those against LinkedIn say that young people in particular, don’t have LinkedIn profiles and manage their lives on Facebook anyway, so the personal and professional are simply managed on that one network.

So, how does this tie to perspective?

NOTE: Perspective, in my experience, is more than just an interesting visual trick. Rather, perspective can be simply defined as a mental view or outlook. (At least according to the dictionary sitting on my desk***) As an example, I was discussing musical theory when playing guitar a few nights ago. A rock friend said: “You played the wrong note” to which a jazz friend replied: “There are only 12 notes per octave…some sound better, some sound worse…none are wrong”

In discussing the information above through the office today the opinions were deeply divided.

I, for one, tend to fall into the camp of managing the entirety of my social and business interaction (which may be an artificial distinction anyway) via facebook and twitter. Several others treat Facebook, in particular, as a “rear view mirror.” It isn’t a way to establish new connections…but to re-connect with old connections.

Years before today, whilst still focused on DataBase Administration activities and Data Warehousing, I found the entirety of my business interaction was via LinkedIn. So what precipitated the change?

I think, perhaps, it is my perspective.

Linked in, as Karen notes, tends to be more passive interaction for me. A database of contacts, or a tool if searching for new employment.

The perspective of those in the office who disagree is quite intriguing.

They, in contrast, leverage the interactive features of LinkedIn (answers, groups, etc) much more heavily than I do.

Sorry, my grandmother was speaking through me for a minute…

If nothing else, today’s discussion were (for me) indicative that Social Media is less about strict rules-based interaction than most of us tend to categorize. I think the beauty of what Karen discussed (have you read it yet?****) is that she summarizes the reality of Social media quite clearly:

Companies must move past the “when and how not if” debate, and focus on how to use social as a powerful and effective extension of business strategy.

* The wikipedia article on perspective is where the image was sourced and is worth a read.